Over the past several decades, Stephen Galvano has led various ministry teams to Zambia. Their goal is never to build a church or build up themselves, but rather to build-up, encourage, and edify pastors and leaders. God has moved overwhelmingly in Zambia. During one particular trip, over 250 churches participated in a event that touched the entire nation. All said, over 20,000 attended the evening rallies where hundreds were healed, and nearly 10,000 were saved. The daily pastor’s seminar touched more pastors than any other event in recent history. They were renewed to continue God’s work. We believe the residual effects of this event will continue for years to come.

Now Playing: “Zambia, the Crusade that Touched a Nation”. Captured completely on location in Zambia, Africa, this film chronicles the entire journey of Stephen Galvano and team as they undergo this life-altering experience. Journey with them across the plains of Africa, and see a nation being transformed. Running time: 51mins. Click above to view.

REPORT OF JUBILEE 2000 CRUSADE
Calvary greetings to you. We are well and blessed especially after the crusade and School of Ministry.
I wish to say that we are very excited to have you for the crusade and your anointed ministry proclaiming and teaching. The following were observed:

ATTENDANCE
We saw about five thousand in attendance on the first day, to about twenty five thousand people on the last day of the crusade. At the School of Ministry, there were about 100 to 300 pastors and leaders attending daily. There were people from very distant towns of Zambia also.

ALTAR CALL
There were about five thousand who surrendered their lives to the Lord. An average of four thousand responded to the prayer of healing and deliverance and many were healed and delivered from demons and witchcraft. An invitation to pray for incurable diseases such as T.B., cancer, and HIV Aids were made. More than two hundred people came forward for prayer and the presence of God was so strong that many people were touched and fell down by the power of God.

TESTIMONY
There were many people who were under the spell od satanism who had been delivered. One lady has even joined our church. One brother was deaf and as Pastor Lee was praying the ear drum opened and is now able to hear. The brother in the praise team came for prayer for his wife who was dying of malaria. Pastor Galvano and team praying and she was healed while at the hospital. Even today she is very fine. The township where the crusade was being held has experienced a calmness and peace as opposed to the violence that has plagued that place. In one night we had over two hundred people who responded to the baptism of the Holy Ghost and about thirty two people testified to have experienced the baptism. One brother came forward for prayer in regard to finances. The following day God blessed him with K10,000,00.00 (US$3,500.00).

The Mayor of Ndola City was overwhelmed at Pastor Galvano and his team of their ministry. He sent the secretary with the mayor’s official car to pick Pastor Galvano up for further ministry but found him already gone to the hotel. Pastor Galvano and team were declared citizens of Ndola by the Mayor. At the School of Ministry on the 18th of April, there were two people who were prayed for by the team and one of them had demonic oppression and the Lord healed and restored his mind. There was a man who was brought from the hospital with T.B. which is a very deadly disease and it is associated with HIV Aids. After prayer, they went to the hospital for a medical examination. The mother has said that there is a medical certificate to certify that the gentleman no longer has T.B. Glory to our God! There are many testimonies that are flooding in and I will send them all to you.

CONCLUSION
This School of Ministry and Jubilee Crusade has a great impact on a lot of people spiritually, physically, etc. This has to become a annual event. A greater Ndola Christian Fellowship has been formed to facilitate meetings to provide Fatherhood. Further details will be given to you later. Sincerely for the Kingdom,

“The coming of Reverend Stephen Galvano earlier was a big blessing to the church in Ndola and Zambia as a nation. The crusade and the school of ministry impacted me and a small group of pastors who began to pray and seek God’s direction for our country.
The fire that was lit in the nation through Reverend Galvano’s ministry in the city began to spread like wild fire in the country.The ministry of Reverend Galvano was a call to prayer and revival.
I will never forget how the glory of the Lord struck me to the ground when I was interpreting for Reverend Galvano on the fourth day of the crusade. I could not stand and found myself on the ground for a long time. The glory and the presence of God was so evident that night. Right there I knew that God was calling me to a higher dimension of ministry. Another interpreter was sought to help because I could not stand.

After the crusade and the school of ministry, I felt a strong urge to pray. From that time I introduced a prayer tower at my home. We started praying every morning from 6:00 to 8:00. Eventually a prayer chain introduced and people come to pray and fast exchanging days from Monday to Saturday. Because of this, God opened a wonderful door for me according to the prophecy Reverend Galvano gave me at the first day of the crusade. I began to minister senior government officials and later the president. Many times I find myself in prayer and discussion with the president.I have seen the hand of God in my ministry and congregation. God has been prospering us spiritually and numerically. I thank the Lord for you and the vision He has placed upon your heart.”
Pastor Barney Mulenga

“Dear Pastor Galvano,
Greeting in the name of Jesus our risen savior. I trust you have continued serving the Lord diligently.
Your name has become a household name with us. Thank you so much for blessing Pastor Ngosa and family. Catherine is always talking about you and your ministry. You have really impacted her life with the call to obedience when God speaks.We must be a people of endurance up to the end. this is a sign of an apostolic people. God is using a fresh APOSTOLIC SPIRIT of endurance as he restores the church before his coming.
Please Pastor Galvano, continue with that which God has impressed upon your mind in the area of ministry. Catherine and myself have also been working together in an interdenominational ministry. We are working in the area of pre marriage counseling as a perquisite for strong marriages, homes and thus a strong church. God is indeed doing a new new thing over the nations by His Spirit in many different areas.
You have really been a blessing me through Catherine, thank God for your ministry. Continue to be diligent for the Lord. Please also extend my sincere gratitude to your son whom we have heard is also very diligent for the Lord.
Please accept these two African shirts for you and your son. These are tokens of our gratitude and love for you and the ministry. Our thoughts are with you as you labour for the Kingdom. I look forward to meet you next year at the World Ministry Conference, and to sit under your feet for ministry, as long as almighty God continues to give me his breath in my nostrils.
God Bless You, guard and protect you in all your endeavors in the ministry and your life.
Love in Christ,
Meka Kamanga” 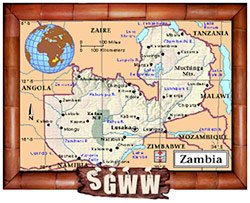